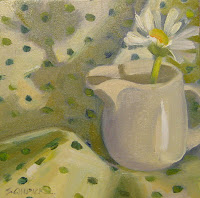 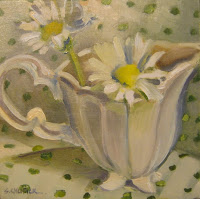 When it's snowing deeply outside on this winters day, I'm working on still life in my studio, and listening to an Agatha Christie novel.  Gotta love those who-dunnits. I also love white creamer jugs.  Here's two little ones modelling the daisies.  Each is painted on 6 x 6" wood panel.
Posted by Unknown at 4:47 PM No comments:

It's an honour to paint a request for something specific for someone.  In doing so, the artist enters a contract with the client.

There are always expectations.    Expectations of the client are to what the outcome might be.  Rightly so...a client should discuss with the artist their vision if they have one, before the work commences (sometimes there are design decisions, that  trump the clients expected vision). The expectations of the artist are to paint with integrity.  An artist must follow their own instincts making their own judgements and decisions as the painting progresses.  Personally I get quite delighted to work with clients on any ideas they might have, but design decisions must be mine.

'Ginger'  is a recent commission.  She is a beloved pet who passed away; the client wanted to give a portrait of Ginger to her parents for Christmas.  We discussed size, price and a special request was to paint in Ginger's name on the painting. Well, why not, I thought...and so Ginger's name was included in the design as the painting progressed. I used a stencil to keep letters tidy, and glazed over it all afterwards with raw sienna to harmonize it with the other tones of the painting.  After the glaze dried i painted in some lighter areas and tweaked a few highlights.  It was a real pleasure to paint her for such a sweet client.

There is another part of this story.  The client went in to labour on Dec 23, and was delivered of a first born son on Christmas eve!  I think her parents got two presents for Christmas.  And I think 'Ginger' just might be playing second fiddle.  ...heh heh...thats just fine by me.  Congratulations to the proud parents.

Posted by Unknown at 8:54 AM No comments: 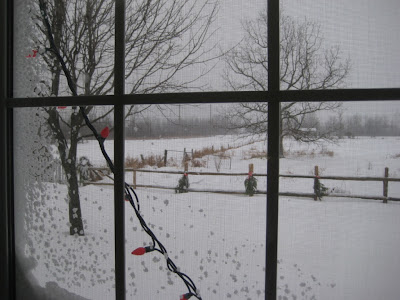 If you live in Canada, you will know the term SNOW DAY.  When you're a kid it can mean all kinds of wonderful things; not least among them, school is cancelled!  That's always cause for celebration.  My brothers and I would don our snow gear and trudge out into the wintery wonderland to play, building snow forts and snow men, sliding down any small slope in the neighbourhood and eating snow balls from our mittens...yep gross... i know, but all kids do it. 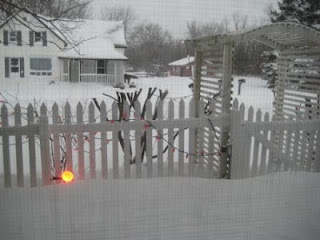 It is SNOWING out here in the countryside near Elginburg today.  It snowed all night. We have not had a deep snowfall for a long time, so for me it was a treat to wake up to this morning.  "Snow day!" I thought, when i woke up and looked out my bedroom window.  Dave and i are both lucky that we dont have to be anywhere today. Because if you have to travel on snowy roads, it can be treacherous. The girls got home safely yesterday from Christmas when the roads were fine... all good.  Christmas for us is family time; games, food and sharing.  We certainly got that in spades.  Here's Dave and Jane and Holly engrossed in a board game.  I wish everyone a healthy and prosperous new year!

Well so far so good...no end of the world in our neck of the woods as far as I can see!  We are gearing up for Christmas though.  The shops were kind of crazy today... good thing I only needed to make one stop. whoa!  the parking lot at the liquour store was nuts. I've never seen the place so busy, everybody getting their holiday cheer in various quantities. I bought rum, i love the Cuban sort, nothing quite like it with eggnog.

After the shops,  i met the train; my daughter Jane arrived home from the big smoke in Toronto...lots to chat about...she works on CBC's Dragons Den.  January will see her  going on some audition tours, they do a lot of them, 40 cities in all, though she wont do them all. She'll be going on the one in Ottawa and one in St. Johns NFLD.  She's excited about it. I'm excited for her too.  I've never been to St. Johns, but I'd love to go sometime...but maybe not in January. heh heh.

Above is tonights effort in the studio.

Posted by Unknown at 9:12 PM No comments:

This one is all about mood, that feeling of strolling  glorious piazza's on sultry warm evenings. It brought back heaps of memories while I was painting it. You could nearly always hear accordian music drifting along in the night air. When dining at outdoor cafe's,  street vendors come right up to your table to try to sell their rose's.  It's a little intrusive, so we didn't buy any that way.  There were a lot of street vendors in the piazza's at night.  Dave bought some slingshot laser rockets from one guy. Back at home, they were a hit outside after Thanksgiving dinner around our campfire in the evening.  One thing I loved about Rome was trying different food, it seems every outdoor cafe is a gourmet's delight.  We didn't hit a bad one the whole time we were there.  Without a doubt, the pasta and the pizza is the MOST devine.  My favourite is the Napoli pizza, just tomatoes, cheese and anchovies on a super thin crust cooked in a wood fire oven. yum!

Lots going on this weekend, but yesterday in the afternoon I worked on this painting in the sunshine in my studio.  It's a result of a trip to Rome this past September. I loved the evenings when it cooled off and we would wander through the old streets of antiquity.  Sampling the culinary delights was a big part of that experience. 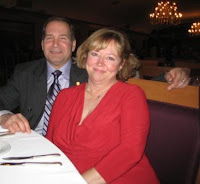 Last night we attended a Christmas party with the group that my husband works for.  There must have been nearly 200 people dining, chatting and kicking up their heels in the spirit of the season.  Calian, (the company) put on a truly marvelous evening of festivity, in the style of good old fashioned Christmas cheer.  It's so good to see old friends and meet new ones too.  I wore my red dress, and had a great time...even got in a few dances with the old boy, which always makes my evening:)
Today we will drive to Ottawa and share a little Christmas with my dad and his partner Diana.  They are not able to get out much due to health issues.  We hope that an afternoon visit with them will brighten their holiday season a little.  My daughter Holly and Jeff will also meet us there.

The Fine Tuners played at the SCA Halifax exhibition opening reception, I really enjoyed their lively music. I must confess nearly every time i hear fiddle music it makes me want to do a little clog, jig, or reel. ( in private of course, because i really dont know the steps!)  Nova Scotia is in my blood, I was born there. I think that leprachaun is in the blood of the fiddler from The Fine Tuners.  They were nice lads, and chatted to us after they played.

I will be starting off the new year showing some of my works at the Mill Street Gallery and Cafe in Sydenham. I'm looking forward to hanging the pieces Dec 29.  The show will run for a few months, I think until end of February.   I will be one of 3 artists showing work there for a few months.  The others are Frankie LeMonde-Meunier(fibre art) and Vera Donefer(abstract works).  The Mill Street Gallery Cafe is showing original works on a regular rotating basis.  I for one love to see original works on the walls of cafes and restaurants when I'm enjoying a meal.  Hooray!... for the Mill Street Gallery Cafe.
Posted by Unknown at 11:40 AM 2 comments:

Sunday back and forth on the easle 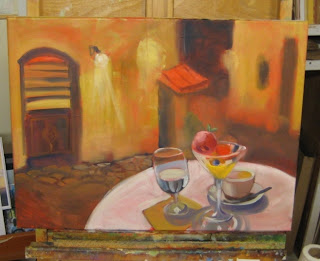 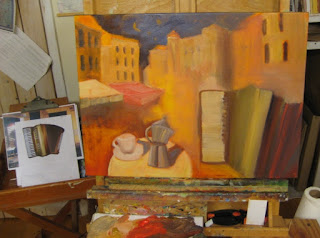 I'm working on two paintings concurrently from my Rome experience.  I've been going back and forth between them a lot, changing compositions and restating passages.  I thought I'd post their progress, as it's a slow painting process.  My notion is to express a mood of delight in the city; I'm not at all interested in actually recording landmarks.  The cafe culture at night was especially fabulous.  That's what these two paintings are going to be about...the coffee,accordian and gelato, which make up the forgrounds, should get the idea across.  You can see the picture of the accordian (to the left of the easle) which I'm using as a painting resource. That's because, not being very musical, I dont actually know what an accordian really looks like.  I had a great photo I took of an accordian player one evening, that I initially used, but in the end, I didn't like the addition of the figure.  It seemed to take the focus off the main idea...so after repainting him twice, I decided to scrape him off. That's when I decided to add a giant accordian instead. I think it will work.  My gut feels happier about it, so that's usually a good sign.

Posted by Unknown at 5:55 PM No comments: 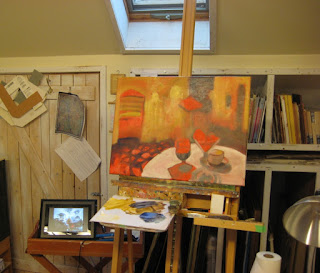 I'm excited to finally get working on my Rome experience. It's been knocking about in my head every since I got back from my trip, over 2 months ago now. All good though, things often happen for a reason.  I've had all this time to savour it, and only today i began to extract  what my week in the eternal city meant to me..   My idea is to paint like I'm feeling the experience... the experiences that I loved most about it that have stayed with me.   Likely that will  translate into meandering the curvy backstreets, gelato tasting, capuccino sipping, antiquity loving, accordian playing, botanical adoring feelings.  Stay tuned and see what happens:)  You can see one painting I'm working on, on the easle, but it's only beginnings right now.  I'll post again when i get further with it. 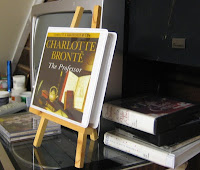 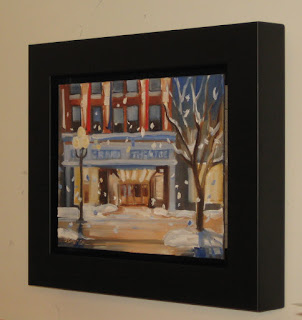 I also framed my little nochturn of the Grand in the snow.  What do you think?  I love the black floating frame choice this time...the drama of it.  You can also see my latest audio book choice, which so far is just luscious!  I'm loving "The Professor" by Charlotte Bronte.  I haven't read any of her books, just her sister Emily Bronte's works.  I've only just started this one, but already i know i'm going to LOVE it. woo hoo for audio books...i think i'm becoming a literary geek. ha ha.

Welcome to my art blog

Gallery at the Porch Door

Thank you to all of the gallery visitors who came out while I operated my porch gallery. Due to our impending move, I have had to close my porch gallery this summer, but my work can be seen at several other galleries listed on my website. Please email me for details, and THANKYOU art lovers! - Sally